For today’s throwback Tuesday im going to talk about Scott McDaniel and Chuck Dixon’s run on D.C’s Nightwing. This is one of my favourite runs on a comic book ever, mainly for the fact that they finally managed to turn the former boy wonder Robin/Dick Grayson into a man of his own.

Dick Grayson was part of the circus act known as the Flying Graysons which consisted of himself his mother and father.  When his parents were killed by some gangsters which was made to look like an accident during one of their performances there happened to be certain Bruce Wayne in the crowd. Sensing that the young Dick Grayson may need guidance much like he did when his parents were killed in front of him Bruce Wayne makes the young Grayson his ward.  Eventually Wayne tells Grayson his alter ego and proceeds to train him to aid him in fight against the cowardly and supetstitious criminals of Gotham. Fighting years alongside each other the dynamic duo became a force to be reckoned with Robin moving to college and leading the Teen Titans a group whose members were other sidekicks from main heroes in the D.C. universe (Kid Flash, Wonder Girl etc).  When he decides to drop out of college Batman gives him an ultimatum, live by his rules or give up being Robin.

Robin becomes Nightwing and kind of floats about in comics until he is able to hit the big time and manages to fufill what every son would love to do one day which is fill their fathers shoes.  During the storyline in which Brune Wayne recovers from both physical and mental injury inflicted upon him by Bane, Grayson gets to fill Batmans cowl (this wouldnt be the last time Dick would wear his mentors cape).

When settting up the Nightwing series the first thing they did right was move him out of Gotham and into the neighbouring city Bludhaven (which is meant to be worse crime wise) then they established his own rougues gallery, although there was the odd pop up from from classic Batman and Robin villains.  Dixon manages to flesh out this former sidekick and give him a voice of his own which consisted of Dick Grayson having to trust in himself.  Some of my favourite stories include the introduction of Blockbuster as Nightwings main nemesis who is in charge of all crime in Bludhaven, the Brotherhood of the fist crossover which essentially settled all arguments as to the greatsest martial artist is in the D.C. universe and last but not least the first appearence of Double Dare, two sisters who were acrobats and belong to a travelling circus like Dick did but are thieves. 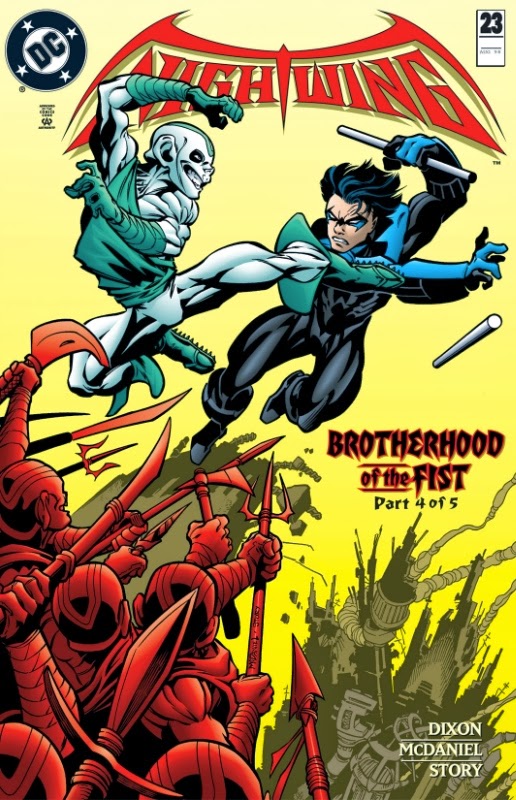 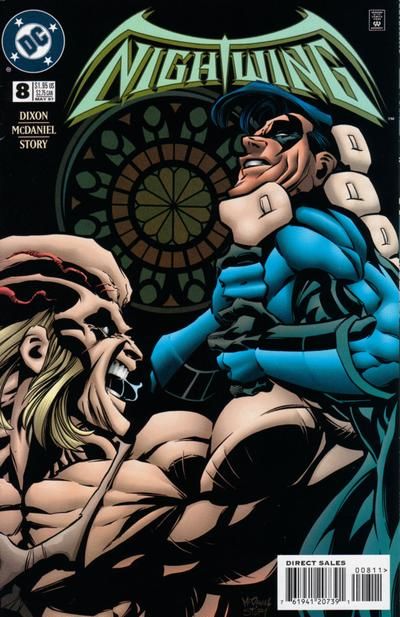 Throughout the series you see the similarities between him and Bruce Wayne but also what makes them different, even though they are essentialy cut from the same cloth.  You also get a bit more of an insight into Dicks feelings about living in the shadow of not only Bruce Wayne but Batman, one particular touching scene is Batman telling Nightwing how proud of him he is.  A guest appearance of Superman shows how the man of steel helped Dick choose the name of Nightwing.  Its touching scenes like these and many others which show why Nightwing is such a loved character and how he is the everyman (son, brother, best friend, boyfriend) in the D.C. universe and the respect he commands and gives much like his teacher although they have different ways of earning and showing it.  Scott McDaniels artwork is amazing, hyper kinetic and trully captures the motion of someone and atheletic and agile as Nightwing (a style which you could see him refining on his run on marvels Daredevil).

The first part of this run is going to be released in graphic novel form at the end of this year and i cannot stress enough how much you should pick this up, i guarentee that you will not be disapointed.