Good action movies seem to be hard to come by these days. Particularly when perusing Hollywood’s rather flimsy offerings of late. Captain America: The Winter Soldier was one of my top movies of the last 18 months, but I don’t necessarily classify it as an ‘action’ movie, as it serves as part of a larger ‘franchise’ being built by Marvel Studios and frankly, comic book adaptations are so plentiful and influential these days, they have carved out a genre all to themselves.

When I say action movies, I’m referring to ‘smash mouth’ throwdown’s where the ‘good guy’ faces seemingly insurmountable odds in his/her quest to stop the terrorists/gangsters/criminals/rivals from achieving their nefarious aims with nothing more than a few deadly skills saved for just such an occasion and a few choices quips to dispense whilst doing so. Film audiences have evolved to a certain extent, so action film fans have come to expect a little more from their ‘bullet-fests’ than the standard fare of the late 80’s and 90’s, but ultimately, the most important thing with any action film is the entertainment factor. If you can’t have some damn fun whilst sending the crooks straight to hell, what’s the point?  The most recent offerings in this genre are awful nostalgia wankfests that don’t seem to understand that ‘modern’ does  not a mean reliance on  ‘CGI’ (as if visual effects are some kind of dirty word) to fill in the gaps where the stars are not capable of providing the physical performance particular scenes require. A good modern action movie in my eyes, should address that world we live in today is different, people have many preoccupations and concerns, geo-politics have changed. The roles of men and women in society have shifted somewhat since the last decade and this is nothing for action filmmakers to be afraid of.

‘John Wick’ is an action movie that attempts to embrace change and is largely successful for it. Keanu Reeves makes a very satisfying return to the genre as the title character, a legendary hit-man, so skilled and fearless that he is referred to by his former employer  as the ‘Boogeyman’. when we meet Wick in the film, he is grieving after the loss of the love of his life, Helen.  When a crime bosses son (who happens to be the offspring of his former employer) steals Wick’s car and kills his dog ( a final gift from his wife) he snaps, and becomes a vengeful force of nature, determined to ensure that those who have wronged him, pay the price.. 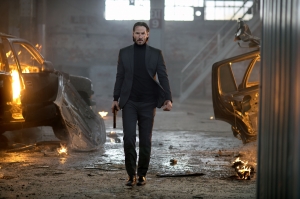 At it’s core, ‘John Wick’ is a simple story and not one that any action film fan should be unfamiliar with, but sometimes the simplest of stories are the most effective. Reeves is back to his iconic best after a couple of crappy misfires recently. As a remorseless killing machine driven by a single purpose, he is not required to provide too much emotional evocation, and that’s just fine with me. When he’s in a film that keeps his dialogue to a minimum, Reeves is able to convey his message through his looks and mannerisms in such a way, that you just can’t help but stop and say ‘damn, that dude is cool’! He smoulders his way through the film in a blistering yet serene style that is unique to him, so much so that you simply cannot imagine anyone else being John Wick. The rest of the cast all fill out their roles well, Viggo Tarasov is a fun villain and give lots of nervous venom by Michael Nyqvist, Alfie Allen is fine as his bumbling son Iosef, who draws John’s ire. Willem Dafoe is reliable as always as his friend and colleague Marcus, and Ian McShane has a cameo as Winston, the owner of a hotel that caters exclusively to assassins. McShane is great, but then he always is. As a friend of mine who has seen the movie says, “ The party don’t start till Lovejoy gets here!” ( look it up folks, Lovejoy is AWESOME) It was refreshing to see a female character taking on the role of a ‘bad guy’ and Adrianne Padlicki clearly relishes the opportunity to play a stone cold killer. Though her dialogue isn’t plentiful, it does need to be as she clearly lets her ample fighting skills do the talking. There’s a great confrontation with her character Ms Perkins and John Wick in a hotel room that is thrilling and fantastically entertaining. The key thing that ‘John Wick’ get’s right, is that it remembers that action movies have to be fun. The film is directed by Chad Stahelski and David Leitch, 2 first time directors who previously worked with Reeves on ‘The Matrix’ and the influence of that film and many others is clear to see. The action sequences are brilliant, hyper-kinetic ‘bullet ballets’, the car chase sequences feel more authentic than anything i’ve seen a while and the cinematography wisely stays away from the usual visual tropes, although there is the ‘slow motion walking away from an explosion shot’ that every action movie seems to use, but I can forgive them for that one. Bar a minor complaint about the pacing of the film in parts and some odd location choices, ‘John Wick’ delivers one heck of a fun ride. It’s great to see that action movies are not permanently confined to ‘straight to DVD’ fare that makes you want to wash your eyes out for fear of being infected by their ‘crapness’ and I for one, hope that this is the start of a revival for this once influential genre and for it’s leading man. 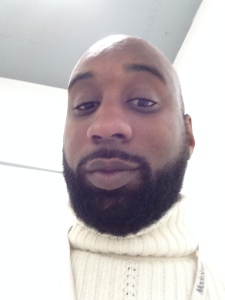 Have you seen ‘John Wick’? What did you think of the movie? A return to form for Keanu or a snoozefest? Let us know what you think in the comments below!