As you all probably know by now, I have a bit of a crush on Luke Cage. I dedicated a blog post to how much I appreciated the character’s evolution and appeal (you can read it here.), hell, I like to kid myself that I even look like him (passing resemblance, severely lacking the muscular build) so when the opportunity arose to attend a special preview event for the forthcoming Marvel Netflix adaptation of ‘Luke Cage’ I jumped at it with a two footed dropkick. Eddie Guerrero would have been so proud. The preview event was being held at ‘Empire Live’  , A film and entertainment weekend in London’s O2 arena. There where various other events going on including a ‘Frozen Sing Along’ (the horror) and various masterclasses in screenwriting, cinematography and the impact of women in film. Whilst all of these sounded like fun, there was really only one thing on my mind, and that’s was a 6ft 6″ chocolate powerhouse of a brother handing out all types of righteous ass whoopings.

I met up with Rich outside of the O2 and we hurried inside, both us in a hushed state of quiet anticipation. After a bit of faffing about with the tickets, we got into the event and I found to my horror that no photography or recording of the event was allowed (trying to prevent piracy or some such thing) but my anxiety was eased when I saw the smoothing figure of Mike Colter, star of ‘Luke Gage’ on stage. Colter is a charming leading man and as fans of ‘Jessica Jones’ will attest to, he’s a perfect fit for Harlem’s Hero for Hire.

The Q&A aspects were pretty interesting, we got some further insight into the process of bring this iconic character to live. We found out that Mike was not a fan of Luke’s original look (what’s so wrong with an afro and a steel tiara I ask you?) and that he had a uncomfortable experience with some of the special effects squibs and had to overcome his struggles with swimming for the role. He also talked a little about the fighting style his character adopted for the show, created by renowned movie combat choreographer James Lew. Colter dubbed it ‘Slap-Fu’ which sounds ridiculous, but actually makes some sense in the context of the characters attitude towards hurting people and knowing the limits of his powers. He also talked about the future for the character, including a few tidbits about ‘The Defenders’  and even used the phrase ‘Hero for Hire’ when describing Luke’s attitude to the whole superhero thing. I wanted to ask if that meant there was a future where we could see a certain dynamic duo on screen in their own show, but unfortunately, Rich & I werent picked out to answer a question. They showcased a few clips from the series, sadly nothing different to what couldn’t be seen on YouTube, although we did get an exclusive clip that featured the return of Claire Temple (seriously, how awesome is Rosario Dawson??) and then before you knew it, it was all over.

After the event finished, Rich and I took a stroll around the arena and stumbled across a display showing a making of feature for the upcoming ‘Assassin’s Creed’. We both felt like the movie looks pretty good, but given Hollywood’s track record with Video Game to Movie adaptations, we had a health amount of scepticism. Hopefully, the filmmakers can deliver a solid movie going experience that pays some homage to the games. That’s all we ever ask for, right?

We wrapped up our visit by grabbing a photo at the photo booth that they had stationed at the event, to commemorate our visit. So for those of you who were wondering about who we are, here you go; 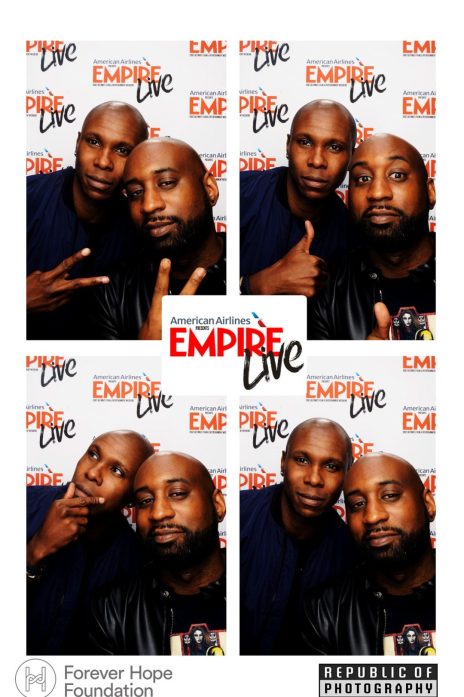 I must say that Empire Live looks like a fascinating event, and certainly one I will consider attending in the future, you can read all about what this year’s event had to offer on their website.  But for me, I was just glad to get my Luke Cage fix and to continue to wait impatiently for the 30th of September. Sweet Christmas!

big thanks to Flickering Myth for giving us the opportunity to attend.